"Sanctions are not diplomacy. They are a precursor to war and an embarrassment to a country that pays lip service to free trade." Ron Paul

‎"Thier main problem with Ron Paul... is because he won't pre-agree to start a war with Iran" - Jon Stewart


What is Jon Stewart talking about?

Or as the Pentagon put it...


The Iran question is often posed, as it was in last week's debate to Ron Paul, as a hypothetical. If Iran was proven to have a nuclear weapon what steps would be taken by the US to assure they did not attack Israel? The establishment media is skillful in the presentation and structure of the debate. The question assumes it is the responsibility of the US to protect Israel from a strike by Iran. But more importantly it assumes that Iran has the ability and strategic desire to attack Israel.

This unclassified assessment of Iran's military capability by the US Department of Defense clearly states that "To ensure regime survival, Iran's security strategy is based first on deterring an attack."

The document goes on to make this key statement, "Iran's nuclear program and its willingness to keep open the possibility of developing nuclear weapons is a central part of its deterrent strategy."

But what if the unpredictable Ahmadinejad and company in Tehran suddenly changed their strategy and decided to go on the offensive? Fortunately they would not have the capability according to the DoD which states, "At present Iran's forces are sufficent to deter or defend against conventional threats from Iran's weaker neighbors such as post-war Iraq, the GCC, Azerbaijan or Afghanistan but lack the air power and logistical ability to power much beyond Iran's boarders or to confront regional powers such as Turkey or Israel."

Stated simply Iran wants to obtain the necessary weapons to defend itself in a bad neighborhood where it finds itself surrounded by a global superpower.

The hyping of the potential nuclear program in Iran is Washington's attempt to establish a pretext that would garner public support for a strike/destabilization campaign on Iran. The obvious goal would be regime change.


Or as another writer put it...

Ron Paul's rise has the War Party frothing at the mouth


Why is war pushed so much when even the Pentagon (see above) doesn't eblieve Iran is a direct threat to the United States?

Answer: Because war is a large part of the US economy (in terms of wealth and, if the draft is re-instituted while a war is going on then, in terms of employment as well)...

Tax Dollars At War from Softbox on Vimeo.


How can Romney put his dog on his car roof for 12 hours? How can Newt Gingrich leave his sick wife for another woman? How can Rick Santorum say he would like to put Judges he disagrees with in jail...

On the Ninth Circuit, a favorite punching bag for conservatives, Santorum said he supported its abolishment—"What the Congress creates, it can uncreate"—or at least tossing out its most liberal judges and replacing them with new ones. He acknowledged there might be some Constitutional problems with just firing the Ninth's judges. His solution: "Maybe we can create a court that puts them in Guam or something like that," a jab that earned him more than a few laughs.


Why so much insensitivity? Well, it kinda goes with the territory of most non-self-made millionaires or billionaires...

As economic inequality in the United States continues to increase, a new study offers some discouraging news for anyone expecting the rich to spontaneously help those who have less.

(A full explanation is here)

And... how do we find the person who is likely to have to most concern for citizens who are not super rich? ...

Ron Paul is also the ONLY candidate to actually give his congressional pay AWAY!

"What is clear is that members of Congress are getting richer compared not only with the average American worker, but also with other very rich Americans.

Going back further, the median wealth of House members grew some two and a half times between 1984 and 2009 in inflation-adjusted dollars, while the wealth of the average American family has actually declined slightly in that same time period, according to data cited by The Washington Post...." 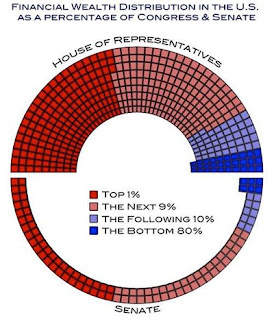 Not one of these people said a respectful word about the antiwar agenda of Ron Paul. And this is a demonstration of the moral wanting of the left. Occupy Wall Street has done very little to push the antiwar issue; and here comes a politician with populist charm raging against the Patriot Act and drones and saying Muslims are angry at us because we're bombing their countries, and the liberal Establishment won't go near him. For the same reason that the Republican Jewish Coalition didn't invite him to its forum: he is considered out of the mainstream on the Israel issue.

When this is actually a matter of life and death for some people. North Carolina Congressman Walter Jones went from a warmonger to a war-opposer during the Iraq war because of the condolence letters he was signing to soldiers' families. Again, this story is about the complete detachment of the Establishment from the true costs of a disastrous war. During Vietnam the privileged young were at risk of being dragged off to Vietnam and they occupied university presidents' offices. This time they don't care.

Whistling to set off a nuclear bomb (from a movie? I remember this scene) ...and getting solitary confinement (unusually harsh and nonsensical punicshment cause if that's possible we have a bigger problem than this one guy).

Rand said his father’s view has been distorted and explained that the real question on foreign policy isn’t about who won’t attack another country, but rather who will. And Santorum’s anti-Iran talk is downright dangerous, Rand said.

“Ron Paul does not want [Iran] to have a nuclear weapon, but the question is do you want someone who’s trigger happy to be your commander in chief?,” Rand said.

Santorum is “a little over-eager to drop bombs,” Rand said.

Perspectives from the left (i.e. the peaceful majority)

After Jimmy Hoffa Jr. warms up the crowd at a Labor Day rally, the Tea Party and conservatives suddenly develop an allergic reaction to violent rhetoric...

The failure of gunboat diplomacy...

First read about the GOP then watch these videos on Class Warfare (notice how the meaning of class warfare has been reveresed) and then notice just one thing... which side in the following video is for job creation and which side is for shedding jobs (i.e. like Romney's company 'Bain')...

When you have figured out the above there is just one more piece you need to understand why Ron Paul's plan of spending reduction will work as opposed to the other GOP candidates who will reduce spending in everything but war...

This is the clincher...

A. "We gotta start somewhere... that's a million dollars (that we could save) - in contrast to the 700 billion we could save to reduce the deficit from the rich and unfairly untaxed
B . From fox news: Dont tax the rich but 'broaden the tax base' - ignore/cover over the realty of the tax codes C. Taxing the majority (poor) instead of taxing the minority.
D. Heritage institute (Koch Brother funded) are trying to create the image of poor being wealthy cause they have normal second world amenities. (i.e. this will lower standard of living).
E. Demonizing (irresponsible animals) the part of society that is suffering from the excess and scamming of certain individuals on wall street etc.


The next post will contain more proof of the GOP's reverse class warfare.
Posted by Abe at 6:13 PM