Notice how much people have to talk about Ron Paul to get him exposure (vs. the other politicians) and how much exposure he actually ends up getting for every 10,000 tweets compared to the others... 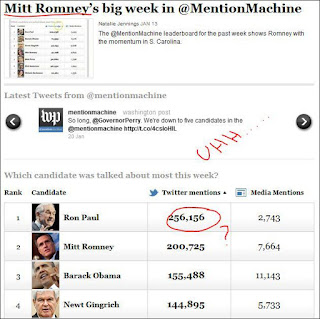 The clear winner in last night’s GOP debate was Texas Congressman Ron Paul. While ABC News and the not so mainstream media continue to black-out his message and campaign, his opponents are stepping forward and unanimously giving credit to Rep. Paul for being right all these years. Paul also rightly claimed the mantle of “the most consistent conservative” of the field of candidates. Ron Paul raised cheers from the crowd more than any other candidate when he uttered the statement, “When you need the government to protect you from yourself, you’re in trouble.”

The final confirmation of Ron Paul’s debate victory was when the event moderators insisted each candidate name one of their opponents and give an example of how he or she inspired or illicited admiration. Rick Perry and Mitt Romney both took that opportunity to tip their hat to Rep. Paul, while former Senator Santorum repeated a statement he’s made at previous debates. It starts out with, “While I don’t always agree with Congressman Paul…”, and concludes with Santorum giving Ron Paul credit for being consistently right on financial and economic issues. Texas Governor Perry gave Rep. Paul credit for educating him on the devastating Federal Reserve system in this country while Mitt Romney gave it up for Ron Paul’s diehard supporters.

You can see the candidates compliment Ron Paul at approximately 11 minutes into the following video...

When the corporate media allows the people to be heard, it's Ron Paul who tops the charts...


Some "journalists" may not like Ron Paul but if the Anchor is allowed to speak freely with thier viewers (such as through Twitter), then there is a measurable effect... From Fox News Live...

6 minutes and 50 seconds - Government came in with social security and medicare (in the 60's) and medicine expanded. [ This has sky-rocketed medical costs, biased research and put children's sanity at risk = Read "Education Part 1 - The Problem Of Psychiatric Drugs"]

14 minutes (SOPA)- "Freedom and the Constitution bring factions together and I think this is a good example" (For the first time every political facebook page all seemed to have the same message - NO to SOPA - The next day it went back to normal.)

18 minutes 50 seconds (On abortion funding through Federal Government) - "All fund are fungible... You need the Government out of that business or you'll always be arguing over who's paying what bills."

It is because of Ron Paul's rise (if you notice when the decision was made) that Obama announced a slimming down of the military.

Ron Paul is right, just watch what Obama has done in response to him....

1. On the Military "WASHINGTON – Top Pentagon officials stressed Thursday that even the shrinking military they envision under President Obama's new strategy will be strong enough to take on all comers, a view not shared by some leaders on Capitol Hill."

Obama Seeks New Power to Merge Agencies, Pledges Some Action ‘With or Without Congress’

President Barack Obama wants more power to reorganize the executive branch, powers he says will only be used to make government more efficient.

“This is the same sort of authority that every business owner has to make sure that his or her company keeps pace with the times,” Obama said at the White House Friday. “Let me be clear, I will only use this authority for reforms that result in more efficiency, better service, and a leaner government.”


Finally... people who cant defend themselves (i.e. their views) use insults for Ron Paul such as "kooky"...

A soldier's interview on CNN was cut short before he could speak on foreign policy and Ron Paul brought him back (this was a while ago - link to cut off interview can be found from the video's main page)...


In short... the only reason Ron Paul is not leading the polls right now is because he is not getting the exposure that he deserves (see image above and the following video link)...

Ron Paul at the Huckabee Presidential Forum (With Transcript)

Ron Paul on Israel: Zionism is Based on Independence and Self-Reliance

Is Ron Paul Right on Israel?

Rand Paul: Newt Gingrich Is Part of the Washington Establishment I Was Sent to Fight

Ron Paul: Allow Israel to Take Care of Herself

Ron Paul: The Banking Establishment Is in Panic Mode

Under Paul Presidency, Welfare Programs Safe for Those Already Dependent

Ron Paul: You Think They Attack Us Because We’re Free and Prosperous?

like former president (and five-star general) Dwight D. Eisenhower, he thinks the current military-industrial complex wields excessive influence on our politics and has become a self-perpetuating engine for counter-productive meddling abroad.
Posted by Abe at 12:01 AM