Newt For President in capsule form... 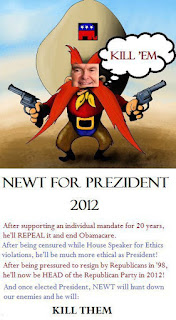 
“The third thing I think you have to do, which is for a conservative a little controversial, is I think you’ve got to require everybody to either have insurance or to post a bond,” Gingrich said in 2008 speaking at the Alegent Health Clinic in Nebraska. Read Alegent‘s press release from Gingrich’s 2008 visit


2. On Freddie Mac and Ethics Violations (Which lead to Republicans forcing him out!)

Newt Gingrich’s consulting firm yesterday released a copy of its 2006 contract with Freddie Mac (FMCC), which covers just one year of his multiple years of service and documents only $300,000 of the $1.6 million he received from the mortgage company.

Gingrich has not denied the $1.7 million amount that his firm reportedly received from Freddie, which was first reported by Bloomberg News. A person familiar with his work for the company told CNNMoney that the figure is "generally accurate."

The Retention Agreement from Freddie Mac is located here. 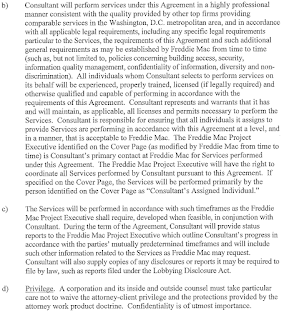 (b) Services have to be rendered to Freddie Mac based on "legal requirement"... the following is one of the laws congress has passed (notice how easy it would be to commit, what was previously fraud, within the law!)...

The shocking truth about the crackdown on Occupy: "No 3 was the most clarifying: draft laws against the little-known loophole that currently allows members of Congress to pass legislation affecting Delaware-based corporations in which they themselves are investors."

(c) Freddie Mac required action within it's specified "timeframes and will include such other information related to the Services as Freddie Mac may request." i.e. You gotta tell us whatever we want to know (that's what the contract says!)

(d) "Confidentiality is of utmost importance."


Is saying anything more really necessary? If so...

Note:Corporate interests(i.e. Freddie Mac) come before the people (unless a waiver is given!)

With the above information in mind, now watch the following video...

1. Mitt Romney says Gingrich was a consultant (approx 15 seconds). Look at the information above... it's obvious the part about being a "historian" is an outright lie. Newt replies, "I offered strategic advice" and then goes on a rant to confuse his voters so they could think he's right.

2. Mitt Romney wasn't working for the Government and a Corporation at the same time (also called 'conflict of interest'... thus the Delaware law above).

3. When Romney says Gingrich was "influence peddling" he is absolutely correct (see extracts of contract above).

Some more evidence of hypocrisy (notice how easy it would be for Obama to beat him in a debate)...


House Speaker Newt Gingrich agreed on Dec. 21 to accept the House ethics investigative subcommittee's finding that he should have sought legal advice on the propriety of using tax-deductible donations to fund two college courses that he taught. He also admitted to providing inaccurate information to the ethics committee in two instances.

Just one month later, on Jan. 21, the full House voted 395-28 to approve the House ethics committee's punishment of a reprimand plus a $300,000 penalty. Though it allowed him to hold onto his powerful post, the outcome marked the first time a sitting speaker has been disciplined by the House

What Gingrich said back then...

"I was overconfident, and in some ways, naive. I did not seek personal gain, but my actions did not reflect creditably on the House. ...I accept responsibility for this, and I deeply regret it." -- House Speaker Newt Gingrich, Dec. 21, 1996

To get an idea of how this corporate lobbying in Washington works...

"Bill Moyers and former White House budget director David Stockman on how politics and high finance have turned our economy into a members-only private club."


Moyers & Company Show 102: On Crony Capitalism from BillMoyers.com on Vimeo.


Look how easily the "liberals" are gonna tear him apart...


An analogy for some context by Mitt Romney...